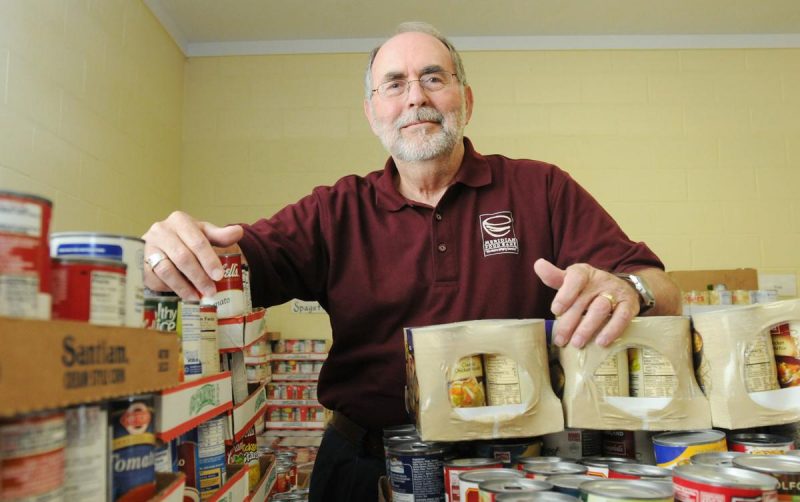 Dan Clark was chaperoning a group of teenagers through the San Francisco Tenderloin District when he found his calling.

The district has one of the highest homeless populations in the city. Its sidewalks have been described as “resembling a refugee camp” by the New York Times because of the homeless camping on them. Clark and the teenagers visited homeless shelters and soup kitchens — they even went door to door asking for blankets, which they donated to those in need.

Clark, who was leading the group from Meridian’s Valley Shepherd Church of the Nazarene, wanted the teens to get insight into what life was like outside of Meridian and feel inspired to change world

“It didn’t really work out that way,” Clark said. “The person that it affected the most was me.”

That experience led Clark to open the Meridian Food Bank in 1999.

Clark, founder and executive director of the food bank, will be retiring on June 1, leaving his position to food bank volunteer Pat Cooper.

Under Clark’s leadership the food bank expanded from a small organization essentially run out of his car to a nonprofit with roughly 500 volunteers. The food bank serves people from across the Treasure Valley. In 2018, the food bank gave out enough food for roughly 50,700 people — or more than 1 million pounds of food — and averaged about 150 new customers a month.

Clark started the food bank after retiring from his position at Idaho Power — where he worked for 20 years. He said he’s looking forward to gardening and maybe taking a couple of trips. After his retirement he will continue to serve as the chairman of the food bank’s board.

“I just help serve and give,” he said. “I think if people can, they should.”

In the mid-2000s, Clark spent around five years traveling and serving in the Nazarene Mission Corps. During that time several of Clark’s friends and other food bank volunteers ran the food bank.

“It took a whole lot of people to make the food bank what it is today,” he said.

Cooper — the new executive director — has lived in Meridian since 1979. Previously he worked at Hewlett-Packard and owned a small business supplying in home care for senior citizens. Cooper started volunteering because he had time on his hands and “wanted to give back to the community,” he said.

Once he takes on the position next month, Cooper hopes to improve some of the food bank’s processes and communication, and look at new programs to institute.

The food bank is funded solely through donations and grants, and is completely volunteer-run. Last year the food bank had a budget of roughly $187,000. All of that money went directly to buying food for those in need, except for a small fraction paying the food bank’s utility bills. The food bank is able to keep a lean budget for an organization its size because of the food donations it receives from members of the community.

Anyone in the Treasure Valley is welcome to visit the food bank twice a month and take as much food as they need to feed themselves or their families. From January through March, the pantry had 4,702 visits from people who took enough food for roughly 11,833 people.

In 2008 the food bank began collaborating with counselors in the West Ada School District to identify and provide students in need with food over the weekends. The food bank developed its backpack program so students who receive free and reduced breakfasts and lunches at school wouldn’t go hungry on the weekend. The students receive packaged meals, fruits and veggies — enough food for three meals on both Saturday and Sunday.

When the program was launched, the food bank served 48 students. This school year, the food bank averaged 650 backpacks full of food per week. The program is a little more costly because everything the students are given needs to be nutritious, long-lasting and not require extensive cooking.

“If we’re not here, there will be a whole lot of people who go hungry,” Clark said.

Patty Bowen is the Meridian Press reporter. You can reach her at pbowen@idahopress.com or follow her on Twitter @pattybowenMP.